Ghost Protocol. Where do I start with film #4 in the Mission Impossible series? How about that after watching, I determined that it was my favourite in the whole series (Side note…..this opinion changes but I’ll talk about that in a different post). Or what about the fact that the it starts with a prison break and after the way that #3 ended you’re left with a what??? How??? Why is Ethan in prison?? Frame of mind.

After that there is a sabotaged mission and the shut down of the IMF *gasp* which initiates Ghost Protocol and that naturally means they are on their own and will be disavowed if caught but in order to save the world they will of course continue on and do what has to be done.

The general feel of the movie is once again action from start to finish which as you know I love more than anything. Tom Cruise is back in fine form once again performing crazy stunts that are just incredible to watch on screen…..I mean, climbing the side of the Burj Khalifa with a pair of magnetic gloves because the server room of course could only be accessed from the outside was all sorts of epic. 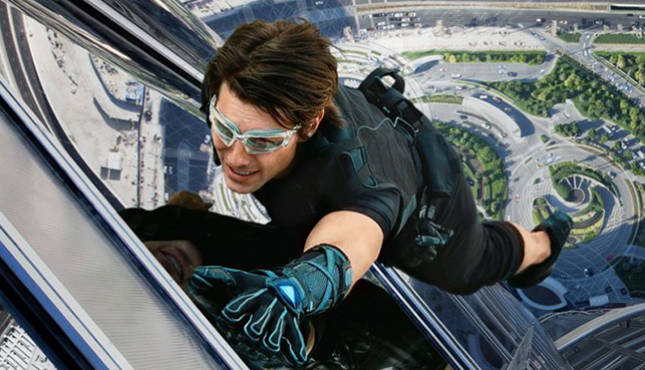 Or if that doesn’t do it for you how about a fast paced car race to stop a bomb in a towered parking garage while evading the bad guy and being forced to fall multiple stories and avoid falling cars landing on you. I also love that on the official soundtrack for this movie the piece of music for that scene is aptly titled ‘World’s Worst Parking Valet’……hey, it made me laugh.

While J.J Abrams didn’t direct this one, Brad Bird did a brilliant job and combined with another great cast lineup including the return of Simon Pegg and Tom Cruise (couldn’t be a Mission movie without Ethan Hunt) and the introduction of Jeremy Renner and Paula Patton, this was ultimately a well packaged and well presented barrel of action, thrills, story and YESSSSSSSS. I loved it so much as much this viewing as my first.

Watch If You Like: Any of the previous Mission Impossible films….or Tom Cruise…or Action movies. Or just because it’s a damn great movie!