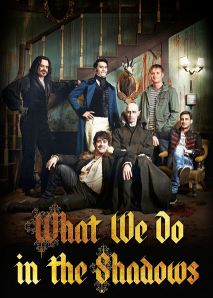 What do you get when you combine a group of vampire housemates and a documentary crew? A brilliantly funny parody movie from the masterful minds of Jemaine Clement & Taika Waititi. I can’t express how much the world needs films like this around, I mean we’re talking a house full of vampires who all have very different personalities and styles, throw a documentary crew into the mix and this is comedy gold with horror elements thrown in for extra fun.

Taika…..Honestly I  am yet to find something that he has created that isn’t just the best ride from start to finish. If you have seen any of his other work, it should be noted that this is a bit of a different style with everything shown from the perspective of a documentary camera crew who is following around a group of Vampires that live together in the town of Wellington in NZ. It’s fictional realism at it’s finest. Is that a thing? Well if it isn’t already then I’m declaring that is now is an official classification of films.

The various personalities of each vampire (or human or werewolf or other) are just so vastly different and each their own bottle of comedy waiting to explode at the perfect moment that had me laughing out loud constantly throughout the movie. I mean a character alone isn’t enough to gain that reaction it’s the actor themselves being able to portray it so well and let me tell you the cast is killer….literally *wink wink* no spoilers. No but seriously, with both Jemaine & Taika not only writing and directing this film together but also staring in it, there is no doubt at all that you are going to be laughing at the most crazy, inappropriate and “how is that even funny” moments.

While this movie is hilarious throughout it should be noted that a vampire film (even if it is a reality/doco), wouldn’t be a vampire film without some blood and horror elements mixed in.So if you’ve come here looking for that aspect somewhere within the comedy don’t worry it delivers,  including a really great night sequence involving werewolves. But before others despair and say thing like “I don’t like horror or scary films! Now I can’t watch this” don’t worry, they are honestly combined with humour as much as the rest of the film so you will find yourself gasping one second and then laughing again the next. It’s a fun ride and honestly I wish that some actual documentaries were presented in this way, they would be much more enjoyable to watch.

Watch If You Like: Boy, Flight of the Conchords, anything that is written or directed by Taika Waititi or Jemaine Clement……or actually even Shaun of the Dead.