Alright, do we need a recap? Oh gosh I don’t know where the first movie ended and this one started it was literally end credit roll click 3 buttons new movie start and now we’re here. It’s all a big blur but I’ll try my best. Alright, so Katniss is the champion, her and Gale with a camera crew….okay stop damn I didn’t talk about these guys last time. How awesome are the film crew characters. I mean they are deserters from the capitol who are out for the rebellion and one of them legit has no tongue so doesn’t talk the whole time but you ALWAYS know exactly what he’s doing or talking about. Talent people talent also big mention to Natalie Dormer because yesssss badass!
Alright recap sorry so yeah that’s all happening and then the capitol blows up a hospital and Katniss then declares for the rebellion as their Mockingjay. The capitol bombs district 13 but not before Peeta (who is being brainwashed by President Snow) manages to give them a warning so everyone is safe. And finally a team go into the capitol to rescue the victors and this is where we find out how bad the brainwashing of Peeta is when he tries to kill Katniss. Okay all caught up? Lets continue.

As finales go, this wasn’t the best one I’ve ever scene BUT it definitely didn’t disappoint. It’s consistently strong and doesn’t move from the overall feel of all 3 previous films. Every character has grown with the story and people you may have liked at first or disliked you found yourself now cheering for or hating. It’s definitely been a journey from the first film to this point and every aspect has kept me hanging on for more. Oh and sorry team Gale did disappear in this film which I never though possible but by the end I was definitely a Katniss & Peeta supporter. Gale I’m sorry but you changed bro, you changed. 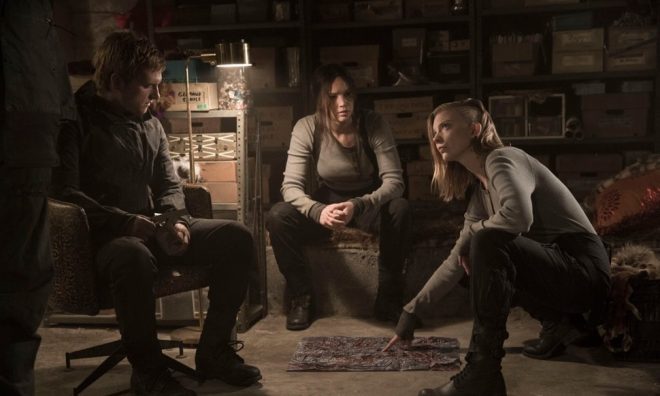 So what was my favourite part of this movie? The fact that the ending had a kind of twist. Yeah no I’m not going to spoil for anyone that actually hasn’t seen it but honestly the fact that the ending had Katniss trusting her instincts was brilliant and proved that she really was the Mockingjay that everyone believed she was. On top of that the way they held nothing back with character deaths like yes dammit I had come to like that character sure just kill them what the hell?? It’s great because you don’t know what to expect. You can’t just assume that all the ‘good guys’ will be okay and that right there makes a great action/adventure movie. Also the ability to still include Phillip Seymour Hoffman’s character after his sad passing during filming was brilliant. A letter may sound corny but damn didn’t it pull at the heart strings **crying emoji**.

This 4 movie series not only did the books a huge justice (I still stand that the films are superior) but it made for a brilliant, fun, enjoyable and emotional watch. And right now with the world the way it is, a little scary at times to see the random parallels in real life. Now excuse me while I go learn archery….you know, just in case.

Watch If You Like: Any of the previous Hunger Games movies…..pretty sure that’s kind of obvious but whatever.