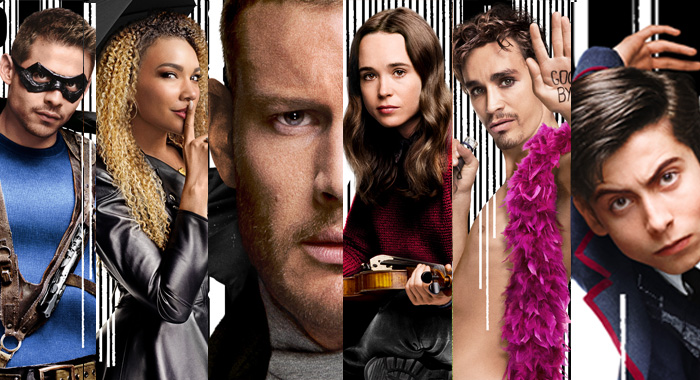 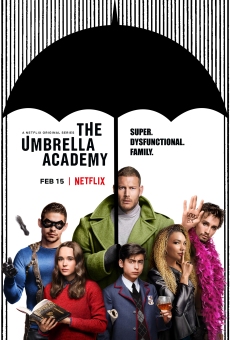 Superheros with dysfunctional family issues out to save the world, what could possible go wrong….everything.

Synopsis: 43 babies are born on the same day, all to mothers who weren’t pregnant 10 minutes prior to birth. One man, Reginald Hargreeves (Colm Feore), seeks out and adopts 7 of the children who discovers, as they grow, that they have powers causing him to start a special school called the Umbrella Academy. On the day of his death, the children (now dysfunctional adults) return home for the funeral. While there, they witness the return of their brother who went missing years prior and learn he’s been stuck in the future the whole time trying to find a way back….in order to stop the end of the world.

Opinion: The Umbrella Academy is like the exact opposite of what the X Men school is always shown to be. In this case there is father/head of the school who is a mean and strict man, giving the children numbers instead of names and demands training and discipline instead of fun and love. This childhood is how we end up with a group of adult siblings that are all messed up in their own different ways. We’re not talking powers and weird stuff, but life and mental issues such as a drug habit or anger issues or anxiety or a number of other things. All of these aspects make for some really interesting characters with my outright favourite being Klaus (Robert Sheehan) who is just amazing to watch as the drug addicted sometimes high, sometimes sobering up, a lot of times seeing dead people and trying to forget pains from his childhood character. The rest of the cast are all really good as well with high mention to Vanya (Ellen Page) and Five (Aidan Gallagher) who both gave stunning performances throughout….watch the show if you want to know more because it genuinely would be spoilers for me to describe them (sorry!)
The story itself is based in the present with flashbacks to the past for back story as well as time travel because one linier timeline is never enough. It does, however, start off a bit slow and struggles I think to find its momentum along with being annoyingly predictable at times. This isn’t to say it isn’t an enjoyable watch because it really is, however, it’s also extremely frustrating at times because of how certain characters behave and react in various situations. While it always fits perfectly with the type of person they are, it was just hard at times to not scream at them for being so stupid. So, despite all those random negative sounding points, it’s clever and exciting and randomly quite violent and has an ending that literally has me wanting more. It’s not as oh my god amazing as I had hoped it would be, but it was fun and I enjoyed it and I’m, as usual, really glad I watched.

Fun Facts: The title screen in every episode is different, appearing in an early scene and adapting to it in a new way each time. Also keep a look out for 2 of the best scenes in the whole show, they are in a disco/club and a bowling alley, trust me they’re so random and hilarious and a ton of fun.