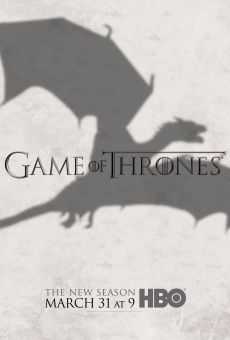 You know nothing Jon Snow.

This will contain spoilers to previous seasons, you have been warned, so you’re encouraged to have watched them before proceeding or at least read my reviews for ONE and TWO first.

Synopsis: So much is happening in the worlds of Westeros and Essos. Jon Snow (Kit Harington) is now travelling with the ‘King Beyond the Wall’ and the wildling army….is he still loyal to the brothers from the wall or has he turned to wiliding life for love? The Lannister’s have partnered with the Tyrell’s and King’s Landing is planning for the upcoming marriage of Margaery (Natalie Dormer) and Joffrey (Jack Gleeson) after Sansa (Sophie Turner) was cast aside and then offered to another. Winterfell is now in ruins after Theon’s (Alfie Allen) failed attempt at taking the kingdom while the Stark Boys finally part ways so Bran (Isaac Hempstead Wright) can turn his journey to beyond the wall as he continues to search for the three eyed raven. And of course Daenerys (Emilia Clarke), who now holds an army of unsullied, has turned her sights temporarily away from the Iron Throne to instead free slaves and punish the cruel masters of the cities of Essos.

Opinion: If you thought the previous seasons were packed full of story arcs and new characters wait until you see this one. SO MUCH HAPPENS! No matter which location you look at or the characters that are there, something is happening or evolving or shocking the viewer each and every time. It also is very clear that for every character we lose in the story another 3 appear, each as fabulously horrible or amazing as the next. My favourite newcomers this season, both for very different reasons, are of course Ygritte (Rose Leslie) and Ramsay Snow (Iwan Rheon). The performances these actors give are so memorable and fun or horrifying that you know they will be referenced and spoken about until the end of the show even if they don’t make it until then. That’s the power of this show and the people on it, the performances are always so incredible and never feel tired or overdone. It keeps the viewing experience consistent and helps you to keep track of the HUGE cast in the show by each being memorable in their own way.

The other thing I love about this season is the way the story evolves characters and your opinions of them. There are some people, let’s use Jaime Lannister (Nikolaj Coster-Waldau) as an example, who you like to dislike from the very start. And yet, in this season he is shown as a more vulnerable character, with a bit more back story and some depth to his person that wasn’t so evident before. I found myself at times feeling sorry for him and wondering if I should actually like him and want him to survive and succeed after all. The ability to change an opinion of a character that was so well formed is the true power of good storytelling

Favourite Episode: Literally no competition, it’s episode 9 – The Rains of Castamere. Not only does it contain one of the most shocking twists in the story so far, it’s also horrifying to watch. Horrifying in one of those oh god I can’t look away kind of ways. Every minute of the episode is crafted in such a way that you’re constantly looking one direction while the real plot is forming the other. The reveal…..well let’s just say it’s a wedding that won’t ever be forgotten.

Adult Themes: Language, nudity, sex, fighting, murder, blood…..absolute family friendly entertainment as usual. The amount of scenes that randomly take place in a brothel full of naked women is much higher than I remember. But don’t worry, there is also plenty of naked men through the series as well, just to keep the balance fair. Also a lot of talk about eunuchs and castration….if that’s you’re sort of thing.