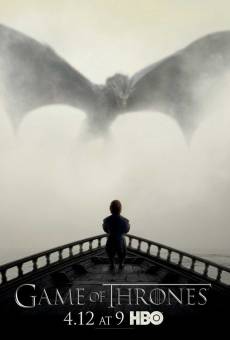 The Mother of Dragons.

This will contain spoilers to previous seasons, you have been warned, so you’re encouraged to have watched them before proceeding or at least read my reviews for ONE, TWO, THREE and FOUR first.

Synopsis: Tywin Lannister (Charles Dance) was a force to be reckoned with and thus his death has thrown the world into disarray. Jaime (Nikolaj Coster-Waldau) is of course full of guilt and determined to make things right in the eyes of his beloved sister while Cersei (Lena Headey) herself is holding onto the position of queen as tightly as she can and through any means possible. This of course means the introduction of the High Sparrow and his Sparrow follows who have been given the power to judge and crucify in the name of faith and the gods. Naturally this is not going to end well for anyone, what was Cersei thinking? Up in the North, poor little Sansa (Sophie Turner) is now married to the horror that is Ramsay Bolton (Iwan Rheon) and beyond there at the wall Jon (Kit Harington) is creating tension in amongst the brothers by becoming allies with the wildlings and letting them through the gates. But the most important part of the story lies across the seas where Daenerys (Emilia Clarke) is battling against the Sons of the Harpy and trying to win favour of the citizens of Meereen. On top of that she’s making new friends and gaining new a new and interesting advisor which will make things much more interesting in the days to come..

Opinion: There is a lot of politics and a lot of horror in this season. It’s well constructed as usual and full of tension and suspense. I mean, even though this was a re-watch, I still found myself on the edge of my seat and yelling at the television during a very specific battle because holy shit is it epic. Not only does it appear after a creation of alliances and during what you think is a time of quiet and non-event, it also manages to be some of the most exciting and gripping television I’ve ever watched. Every part of every scene has your heart racing and the adrenaline pumping and thills along with horror for the entire time. The wildling fight at the wall in a previous season was thought to be great and then we had this one and your mind is completely blown all over again.
This season, however, isn’t just about fighting. The key storyline in King’s Landing is about the introduction of faith as a judge, jury and executioner. Any thing small or large that s deemed a sin in the eyes of the seven gods is punished in very less than pleasant ways. It’s brutal and harsh and starts off as a plan for Cersei to take control but very quickly spirals out of her grasp and into the realms of chaos. It’s harsh and horrifying and in a way a gently nudging message that hey in reality, allowing church to control the state maybe isn’t such a good idea, especially when the church’s ideas don’t necessarily match those of everyone else.
It’s an interesting season with a lot of change, a lot of new story arcs and the introduction of Dorne and the people who reside there. It must also be noted that I have always had a strong dislike for Melisandre (Carice van Houten) and Stannis (Stephen Dillane) but this season makes me loath them and honestly I hope only bad things come their way.

Favourite Episode: That would be Episode 8 – Hardhome. This is the episode with the extremely tense, extremely brutal and extremely amazing battle sequence. While yes other things happen in the episode, it’s this particular part that wins it over and makes it the strong favourite in this season. It’s also the one that shows us that it isn’t just Dragon Glass that can kill a white walker.

Stuff and Things: It should be noted that there are some strong adult themes in this season with the key point being Sansa and her marriage to Ramsay. Their wedding night is less than pleasant and while they thankfully don’t show anything the implication is very much there. But now for better things, because I started it last review, I figured I would keep that death tally going so season 5 had a total death count of……246!